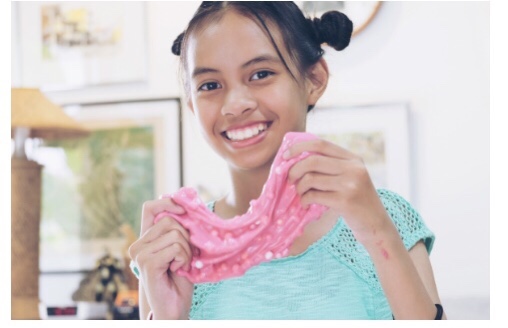 I think slime is one of the few things at my house that we unanimously agree that is SUPER COOL. Okay, maybe not when it gets stuck on furniture but in general it is fun to play with.

My children LOVE slime! Hence, for many years I have tested every possible recipe I have found on the internet and finally found the BEST recipe out there. In fact, it is so cool that it even glows in the dark!!

Slime is a polymer. In order words is a “simple” molecule that repeats over and over like a chain. This scientific idea of ‘repeats’ is in its nomenclature. The word polymer comes from the Greek etymology of “poly” for many and “meros” for units. Polymers are roughly grouped into five main categories. Those are:

1. Polystyrenes. This polymer allows us to make styrofoam.

2. Polyethylene. This group is known for allowing us to produce shopping plastic bags.

4. Polyvinyl chlorides. These polymers have many uses at home such as food wrap and plastic pipes.

3. Polypropylene. This one is used for fibers and bottles.

5. Polytetrafluoroethylenes. These polymers are often known by a registered name called teflon and many products are often named as such. Cool, right?

There are many ways in which we can deepen our children’s learning. We can tie slime to the periodic table, what are mixtures and compounds, what are chemical reactions, and even the law of conservation of mass. Don’t stop with slime, make it a whole chemistry unit!

If you have an advanced child, you can also extend this slime lesson by inviting them to use their chemistry molecular kit to create chains of polymers.

Make Your Own Slime

Once you have done some learning with your children, make the tried but true slime.

Here is the recipe. This recipe was published by Elmer’s Glue and it truly is the best.

You can get all of these ingredients from my Amazon store!

{As an Amazon Associate I earn from qualifying purchases.}

Here is my Elmer’s favorite recipe.

5 ounces of Elmer’s glow in the dark glue

Try making this slime at home and let us know how you like the recipe.